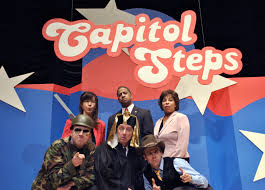 
This week’s Fun Fact Friday takes us back to the 1980s—the decade of money, drugs, and power lunches at The Palm. Washington D.C. was a very different city than it is today. The city’s crime was soaring, the mayor was caught on video smoking crack, and the Redskins won games!

The couple was so popular, in fact, that Rita gave an interview to Playboy magazine that appeared in the April 1981 issue accompanied by a nude pictorial. During the interview, Rita admitted that she and her Congressman husband had sex on the steps of the U.S. Capitol during a break in and all-night House session. Needless to say, the Washingtonians were flabbergasted upon reading such a revelation.

The scandal caused such a hoopla, a political satire performance group decided to call themselves The Capitol Steps. Performing since 1981, the part musical, part comedy theater group originally consisted of real congressional staffers but is now made up of professional actors and singers. The Capitol Steps have released over 40 albums and continue to be a favorite attraction for first time visitors and tourists to the nation’s capital

Unfortunately, Congressman Jenrette later ran into trouble when he got tangled up in an FBI sting called Abscam and was accused of accepting a $50,000 bribe (more on that in a future Fun Fact Friday!) He was convicted and sentenced to two years in prison.

Check out a performance by the Capitol Steps.