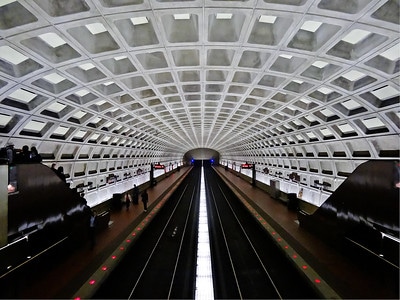 
Have you ever been standing on the platform in the Dupont Circle Metro Station, waiting patiently for the next train to roll up to take you home, and find yourself staring up into the dark, cavernous, concrete ceiling wondering, what am I looking at?

You’re looking at Brutalism! This oddly named architectural style emerged in the 1950s due, in large part, to the cheapness of concrete which greatly appealed to local, state, and federal governments who were in the process of expanding and improving their cities.

But the funny name can be credited to a British architectural critic named Reyner Banham. Not exactly a fan, Banham described it as ‘beton brut’ which translates from French into ‘raw concrete.’

Fast forward to 1976, when Washington D.C. was planning for its public transit system, it enlisted a Chicago based architect named Harry Weese for the design. Certainly the design Weese and his team created reflects Washington’s already established neoclassical architecture; they relied heavily on brutalism evidenced by the use of exposed concrete and repetitive design patterns.

In 2014, the American Institute of Architects gave Harry Weese and his colleagues the “25 Year Award,” which is given to a building that “has stood the test of time for 25-35 years and continues to set standards of excellence for its architectural design and significance.”