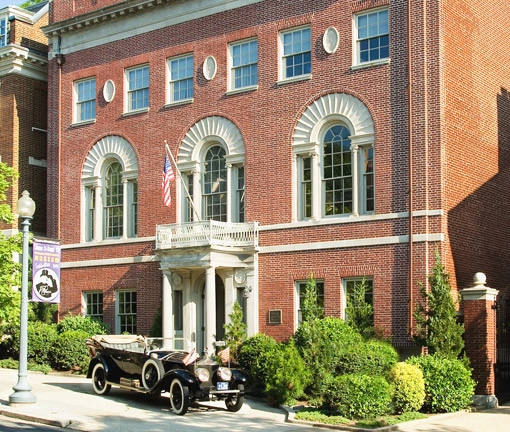 Is The Woodrow Wilson House Haunted?


Halloween puts all of us at District Real Estate in a spooky mood. What better way to celebrate than to share stories about our favorite haunted places in the District! This week’s Fun Fact Friday is about just one of many.

Just off of Embassy Row sits a grand red-brick revival-style Georgian home at 2340 S St NW.  It is named after its most famous and possibly longest resident, our twenty-eighth president, Woodrow Wilson.

Wilson had great plans for life after his presidency ended. He dreamed of starting a law firm and pursuing various scholarly passions. Sadly, a stroke he suffered before his presidency even ended in 1919 rendered him an invalid. The President’s wife Edith moved Woodrow into the house off Embassy Row in 1921, and he died there in 1924–his dreams left behind.

Many say a disappointed ghost roams around the Woodrow Wilson House, shuffling with a cane, and struggling up the grand stairs. Others have heard the sounds of a man in the President’s former bedroom, sobbing.

Ghoulish tales further describe sightings of a pale, almost transparent figure seated at the former president’s desk, sharply appointed in a dress shirt, tie, and jacket. The phantom’s face is disfigured by a common symptom of paralytic strokes, muscles that sag down the left side of his face.

Perhaps when the caretaker finally quit in 1969-unable to calmly ignore the unexplainable shuffle he had always heard within the house-the route he took passed by our newest project was 2150 Florida Avenue NW. When you visit our innovative yet classic condominium homes, which are probably not haunted, try to stop by the Woodrow Wilson House. You may see a ghost!